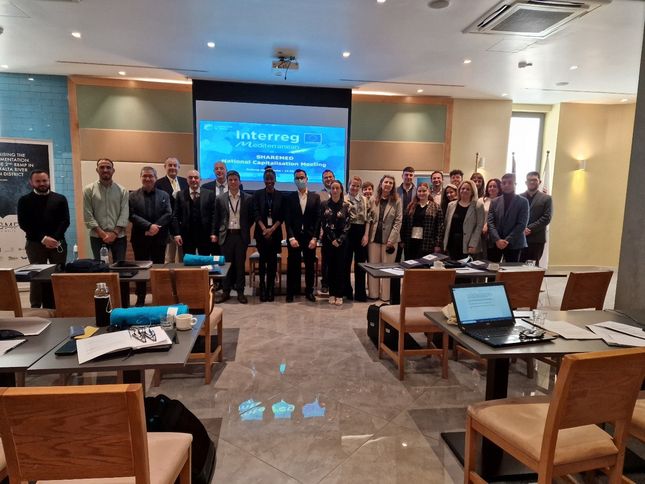 On Friday 22 April 2022, the University of Malta organised a National Capitalisation Meeting, a key component of the SHAREMED project, which was held at the Preluna Hotel in Sliema. The meeting was moderated by Dr Anthony Galea, SHAREMED's principal investigator at the Univer-sity of Malta. Dr Alicia Bugeja Said, the Parliamentary Secretary for Fisheries, Aquaculture, and Animal Rights, researchers from the University of Malta, and various stakeholders also attended this event. Dr Cosimo Solidoro, from the Istituto Nazionale di Oceanografia e di Geofisica Sperimentale, the project leader, intervened remotely.

SHAREMED is a strategic project that is partially funded by the Interreg MED Programme, within the framework of PANORAMED. The ultimate aim of this project is to increase the Mediterranean regional, sub-regional and local authorities, and the research community's ability to jointly assess and address environmental hazards related to pollution within the Mediterranean region. The need to assess and address the increasing presence of coexisting environmental threats that propagate in space, time, and across political boundaries, calls for transnational actions which are coordinated and based on evidence-rooted joint and common interventions.

During the introductory session, Dr Solidoro described SHAREMED's goals. Furthermore, he also revealed that one of its main challenges is the creation of a transnational system for observing and assessing risks, as well as to test its implementation across several areas. The plan is to identify stakeholders and designate responsibilities. The project also seeks to enhance observational capabilities in terms of physical, as well as, biological parameters. Dr Alicia Bugeja Said spoke of the importance of research related to policy and decision making. Efficient environmental conservation requires research, as well as an enhanced understanding of climate change's impact. Thus, society as a whole can benefit from projects like SHAREMED.

In the morning session, a number of stakeholders and guests provided an overview of the work they do, roles which are within the scope of SHAREMED. Prof. Giuseppe Ciraolo from University of Palermo portrayed the outcomes of the CALYPSO series of projects and i-waveNET. Prof. Alan Deidun from the Department of Geosciences spoke about the SEA-EU alliance, of which the University of Malta is a member. The emergence of citizen science as an important research tool was also discussed. Prof. Pauline Galea, who described the collaboration between the University and Civil Protection Department in tsunami observation and the development of a national contingency plan in the event of a tsunami.

Bjorn Cassar Simmonds, from the Vessel Traffic Services (VTS), and Capt. Mark A. Chappelle from the Malta Hydrographic Office (MHO) both described the roles of their divisions, which form part of Transport Malta (TM). VTS is responsible for regulating traffic within Malta’s territorial waters, especially within the harbours and the bunkering areas. The MHO is tasked with providing hydrographic data to seafarers. Justin Galea, from AquaBioTech Group, described the various activi-ties and collaborations that the group undertakes. Sandrine Borg from Malta Council of Science and Technology also described the various research support programmes which are currently available.

The presentations were followed by a brainstorming session which elicited the consideration of various key questions relating to environmental hazards and threats in the Mediterranean Sea. Various threats where brought up, covering a very wide range of causes (anthropogenic to natural), scopes (coastal, sea bed, water column) and natures (physical, chemical and biological). There was also an in-depth discussion regarding the importance of data acquisition, and how this data can be disseminated in order to help minimise and address these threats.

In the afternoon a technical meeting was held, during which Dr Adam Gauci, Ms Audrey Zammit and Dr Joel Azzopardi described the activities of the Oceanography Malta Research Group, within the Department of Geosciences, such as observing systems, data visualisation and numerical modelling. At the end of the session, Ms Raisa Galea De Giovanni, the meeting's rapporteur, presented a summary of the day’s proceedings.

All news
Back to top